When was the last time you did something for the first time? 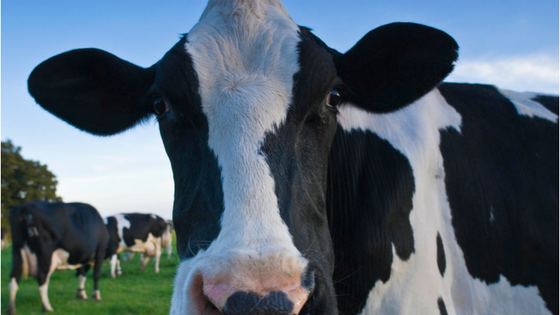 If you can’t answer that one in a few seconds, consider this: Maybe it’s been way too long since you took a risk and stepped out into uncharted waters. It doesn’t have to be a big walloping “first time”; even a playful little risk has the power to revolutionize your life.

A while back, my husband, Ben, and I were at a basketball banquet that was catered by Chick-Fil-A, the restaurant chain with the brilliant ads featuring cows and misspelled words. (Somehow it works.) In fact, that night, the featured mascot was a a person in a cow suit, who bounded in, high fiving kids and cavorting around the gym in fun fashion. I turned to Ben and said, “That looks like fun. I could do that.” To which he replied, “Yeah, you should.” And then I didn’t. Sounded like a lot of trouble, and a job requiring skills I probably didn’t have.

A couple months later, we were eating at Chick-Fil-A, when my daughter said, “Hey Mom, why don’t you go up there and ask the manager about putting on that cow suit?” Busted. How could I not, and risk being a poor role model for my own offspring? So I approached the counter, asked for the manager, and when he appeared, I said,

“Could you tell me exactly what it takes to be able to put on that cow suit and do a couple gigs?”

So I got an application (clearly intended for an adolescent looking for a part time job), and a few days later the market representative called and asked if I could meet her for an interview. Really excited and anxious to have a little fun, i pulled together my college transcripts, a resume, and some references. Then I dressed to kill, and met her at the mall. We talked, and after a few minutes, ever the professional, she shook my hand and said, “I am delighted to offer you this position as the Area Market Cow for Chick-fil-A.”

So I went on tour at a couple shopping malls, a baseball diamond, and a random party. My favorite, though, was my last appearance, at the same basketball banquet that had spoken to my restless heart a year before. As I stood behind a door, waiting to make my entrance, I had no idea how life-changing my swan song was going to be.

If you’ve never been inside a cow suit before, you may not know exactly how hot it gets in there. We’re talkin’ steamy, claustrophobia-inducing hot, and this particular unfortunate moment, I felt my hormonal furnace revving up inside me (Ladies of a “certain age” will totally understand this.), sending the temperature inside that suit into the stratosphere.

This was an actual prayer. (Ladies of a “certain age” will totally understand this also.)

But it wasn’t just because of the heat. It was a fresh reminder of personal sorrow that I was experiencing. You see, Ben and I had dealt with infertility for most of our married life. Against the odds, God gave us a beautiful daughter, and we enjoyed her so much that for twenty years we asked Him for another.

For whatever reason, we weren’t led to adopt, and weren’t candidates for other methods of conception. And at that point in my life, every “personal summer” was a fresh reminder that “no more babies” was His final answer, and for the previous couple of years, I couldn’t decide if I was still a joyful person just going through a season of sadness, or if I was actually turning into a sad person.

But at that particular moment of escalating temps, I had a thought that revolutionized my perspective:

“Wow, what a perfect picture of joy and sorrow in the same place–me having a hot flash in a cow suit!”

And that revelation changed me forever. I began to live, knowing that joy and sorrow really can walk side by side.  It’s just up to us to access the joy while we’re going through the tough stuff: the losses, the broken dreams, the bumps in the road, and all manner of random crumminess.

I began to look for joy like a heat-seeking missile, and that search became the catalyst for  my life’s work: helping people discover that joy, no matter what else is going on in life.

What would you like to try for the first time? Don’t impose limits for now, just dredge up what’s been sitting around in your heart and mind for a while, and bring it into the light.

Then write it down: in the comments below, on my Facebook page, on a continuing list you post somewhere that you’ll see often. Maybe in the refrigerator. Maybe in the bathroom. Wherever.

No matter how small, don’t underestimate the potential of a little risk reaping significant rewards. This could be the start of something bigger than you…

(FYI, I believe that Chick-fil-A is still hiring cow impersonators.)