What do your negative circumstances make possible? 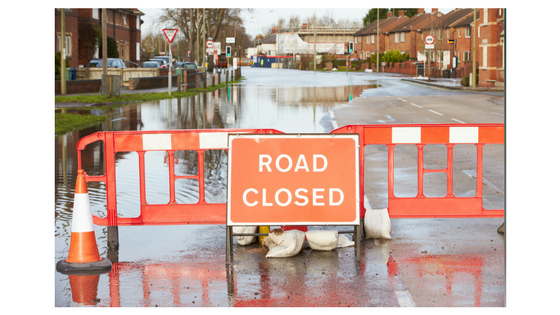 You may not be in the best place right now. Maybe you’re experiencing a health crisis, a relationship crisis, a career crisis. Maybe you have too much to do. Or not enough.

Whatever way your life isn’t the greatest, you may think that these circumstances don’t lend themselves to you cavorting off on some high falutin’ adventure.

And maybe they don’t.

Maybe these undesirable days make an adventure possible–one you couldn’t have dreamed up in boring old uneventful times.

A while back, Hurricane Joaquin was flirting with the East Coast. Ben and I were traveling back to Virginia from Georgia in the middle of relentless rain, and were forced off of I-95 at the little town of Manning, South Carolina, and into a shelter because the interstate was flooded for 75 miles.

At first, it was like a funny little game; we figured we’d be out of there later that day.

As the hours dragged on, however, we realized we weren’t escaping any time soon. We were bummed and increasingly agitated.

Let’s be honest, though: this could have been much worse. It wasn’t the Super Dome during Katrina. We were safe and dry, and the Red Cross, bless ’em, provided cots, blankets and pillows.

Unfortunately, we found, they did not provide clean underwear.

But they did their best to offer us what closely resembled food (our first encounter with  Meals Ready to Eat) (hopefully our last) (Ask anyone who’s been in the military.) Plus we grazed on whatever was in the vending machines until we emptied them out: Famous Amos chocolate chip cookies, Little Debbies, animal crackers, Sun Chips.

The biggest challenge, however, was the unknown. We had no idea when we could get out of there—the next day, the day after, the day after that? Maybe never, ever.

Welcome to the Hotel California.

We spent the night there, in what I imagine to be an introvert’s nightmare: a big ol’ group sleep, nose-to-nose with 100 strangers.

The next day, as more hours dragged on, the inside of my head descended into darkness.  You may know this feeling, when you find yourself in an undesirable situation–all perspective goes to the dogs and you end up stewing in your own pitiful juice.

The rain wouldn’t let up, and the police told us there was no way we were exiting the second night, so I had to cancel a speaking engagement for the next day. And then I had my own epiphany of sorts: The title of my talk (which was about finding joy in the middle of a mess) was Celebrate Fiercely…No Matter What!

“Well, this qualifies as a bona fide mess,” I thought. “If I’m going to practice what I was supposed to preach, I guess I’d better get crackin’.”

I had an idea.

The local ladies in the kitchen who showed up and stayed and worked just to feed us didn’t have to be there. Why not show them a little love? I had my phone. I could make an appreciation video for them and share it for the world (at least their town) to see. Yes, make a video. That would be fun.

This is what happens with many adventures: we wanna, but we just start thinking too darn much.

But (thank you, mind-numbing boredom) I pushed through, walked into the kitchen, told them I needed to reassure my daughter that we were doing fine, thanked them for taking such good care of us, and asked if I could interview them. They were delighted. And delightful:

Eventually, after we were set free and had made the long, convoluted journey home (another story for another post), I shared this video of these wonderful ladies with the Mayor of Manning, all the first responders, and the Red Cross, just to thank them for their hospitality and for giving us a safe port in the storm.

What did an unexpected stay in a shelter make possible? A chance to show massive gratitude, and a new Truth to Live By:

There are times when, if you can’t change your circumstances, you might as well just turn your underwear inside out and move forward.

Whether your challenges are big or small, how can you take a shot at “reframing” to find a remarkable risk within the circumstances?

For additional motivation, check out this post from Michael Hyatt’s blog, where I first found this “question that changes everything”!

And if you’re just joining us, check out the very first post (Your Epic Adventure Starts Here), where you’ll learn about starting a yearlong (52 questions) quest to practice living a life of adventure. As a bonus, you will also find the backstory for that ridiculous herd of buffalo on the header photo of this website…