What are you doing now that requires faith? 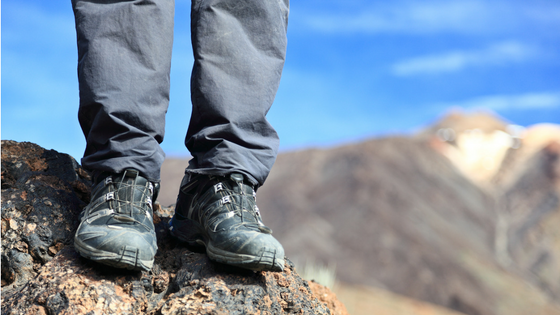 Ever take a trust walk?

It’s when you pair off, one person blindfolded and one seeing, leading the “blind” one around, while the “blind” one has to trust the sighted one not to run into ruin, or a tree at the very least. It’s usually extremely uncomfortable to be, well, blind, and perhaps more to the point, out of control.

One time my husband, Ben, and I were at a marriage retreat doing this. When it was his turn to lead, he walked me into an echo-y room where the sound was bouncing off the walls. “Ben, where ARE we?” I asked, just starting to get a little claustrophobic (in the eyes, anyway). No answer. “Ben, where are YOU?” Again, no answer. He had obviously left the area.

Well, I wasn’t having any of that, so I broke the rules and ripped off the blindfold, only to be confronted by a row of urinals. Yes, folks, he had led me into the men’s restroom, and left me…fortunately, with no men in sight.

He was right outside the door, laughing. I was only sorta laughing. This was not terribly unusual behavior for him, but geez.

Maybe for you, sometimes it feels like God has you on a trust walk and He’s leading you around, blindfolded and holding His hand, and all of a sudden, while you’re just trusting away, He leads you into the men’s room, where your life really does look like a row of urinals, and just leaves you there, your own voice echoing off the walls.

Not cool, say you.

But maybe, in the middle of a hard time, God is asking you to trust Him by doing something that seems…oh, nonsensical at its most benign, risky at its riskiest?

Because a faith adventure can be the best adventure of all.

Notice I did not say the easiest. But so often, the faith risks we take in times of crisis seem to result in the most remarkable experiences.

That story is hers to tell, which she may share with you in a future post. Suffice it to say, when your child hurts, you hurt too, and maybe you, like me, pray, “Dear God, do anything you want with me, just please leave my baby alone.”

It was, in general, a terrible time for us all, full of unanswered questions and grief and fear. But one morning I was praying, and felt an unmistakable urge to start a prayer journal for her “future husband.”

Now, to be honest, I wasn’t totally sure if it was  a) God telling me to do this or  b) me telling God to do this, but I felt the driven to keep it up. I prayed for everything: his health, his family, his problems and worries. And all the while, I wondered if I was being too presumptuous or maybe just plain crazy.

Sometimes during the worst times, it was hard to pray because I couldn’t understand why He would let such lousy things happen to my daughter, and I had no idea how He was working through those prayers. Again, I’m guessing that you yourself probably know how this feels, when life seems so unfair, like you’re stumbling around in a roomful of urinals .

But five years later, I finished the journal, just before the object of my prayers showed up and proposed to my daughter. I wrapped up the journal and gave it to him as a present, so both he and she could see what God had done.

And exactly what had God done?

Would He have brought them together if I hadn’t prayed?

Was His action really dependent on the prayers of someone who never quit thinking, “Maybe this is too much of a risk, because what if I pray and nothing changes? What’ll that do to her faith? What’ll it do to my faith?”

I don’t claim to understand the mystery of prayer.

I don’t believe that we should expect God to give us everything we want. I’m not aware of every single way He answered each prayer of mine because, as you yourself may have experienced, a whole lot of God is a whole lot of mystery.

There is so much I don’t know. Yet I do know this: In the process of my praying, God grew in me a heart for this young man.

I loved him before I knew him.

And that great gift will last us all of our days. Definitely worth the risk.

Are you feeling the pull to do something that requires faith that sometimes you don’t have?

Maybe to make a job change, a relationship change, or any other kind of change? To move forward or backward or even sideways?

Or maybe to make a decision to trust God no matter what? What might that look like in your life?

Thanks to Francis Chan for this adventure-inspiring question!

And if you’re just joining us, check out the very first post (Your Epic Adventure Starts Here), where you’ll learn about starting a yearlong (52 questions) quest to practice living a life of adventure. As a bonus, you will also find the backstory for that ridiculous herd of buffalo on the header photo of this website…