What would you do if you had no fear? 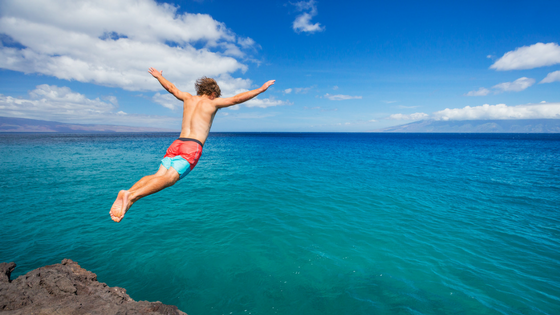 Let’s get this straight right out of the gate:

This question is in regard to adventure, not revenge or anything that totally disregards human decency. You may want to tell someone off or worse, and be afraid of the consequences. Good for you. Because that’s not what we’re talking about here. (Although we may be talking about having a necessary difficult conversation, or telling someone you love them. Now that’s an adventure.)

Or you may be reminded of your younger years, before your brain had fully developed, when you had almost no fear of anything, and did some incredibly dumb stuff.

What we’re talking about is this: sometimes, you’d like to participate in an adventure, and you’re afraid. So you don’t. But  you should.

When I was in college, I had a crush on a boy who was my friend. I really wanted to go out with him, but he wasn’t taking any of the hints I was dropping like bombs. I did, however, sense an opportunity that might never come again (more on that here ) when my dorm of 800 women was sponsoring a dance. And when a dorm of 800 women sponsors a dance, the women have to do the asking. This, I reasoned, would be a great chance to throw one last grenade.

It took me a month to work up the nerve to approach him because, well, what if he said no, and I was humiliated and hurt about it, and I lost him as a friend? Anyway, I decided one evening to finally paint myself into a corner and pull the trigger. We were both on our way to a meeting, so I said to him, “Don’t go away after this meeting. I have a question for you.”

There. No escaping then.

I had no idea what was going on in that meeting that night, seeing as how I was sweating bullets while rehearsing my “script,” and looking for a quick escape route in case he laughed, bellowed, “Go out with you? Are you kidding me?” Then I could run out into the inky darkness of night and never return.

When the meeting finally ended, we went back to his room in the grad house. By this time he could tell I was nervous and, being a rather cocky boy, he was actually enjoying it. He took the only chair in the room (leaving me no place to sit except the edge of the bed), put his feet up on the desk, folded his arms across his chest and said, “Now…what was it you wanted to ask me?”

This irritating display of bravado at first left me a little bumfuzzled, then it made me a little mad, but I quickly collected my courage and told myself, “Play it off, girl, just play it off.”

So I said, “Buddy, I’m about to give you the opportunity of a lifetime.”

He actually had the nerve to laugh.

But here’s the bottom line: we went to the dance, had a great time, and eight weeks later he asked me to marry him.

This time it was MY turn to laugh.

Of course, I said no.

Then much later I said yes.

Then I said no again.

Then I said yes again.

This summer we celebrated our 41st anniversary.

So. Does this mean that pushing through your fear is sure to lead to a happy ending? Not really. (For the record, I asked several boys out in high school to female club-sponsored dances, and had a variety of hideous times and creative “I have to wash my hair that night” rejection responses. My daughter thinks I was the most “forward” girl on the planet. I prefer to describe myself as resilient. Or brave. Or shameless, maybe.)

But it does mean that taking a risk–one that’s in that God-made restless heart of yours–could possibly alter the trajectory of your life.

I mean, I found love, for crying out loud.

Recently when I asked a number of people what they’d do if they had no fear, they rattled off an amazing array of adventures. When I asked them what kinds of fear were stopping them, their responses revealed this: Death and injury were right up there, I won’t lie, but far more prevalent were fears of embarrassment, rejection and failure.

And I totally understand. It’s true, there are no guarantees that you won’t look goofy or break something or fail or get rejected.

But what if you don’t?

What if doing that thing opens the door to a life-changer?

What WOULD you do if you had no fear?

And what is the fear that’s keeping you from doing it? Write it down.

And what kinds of wonderful might happen as a result of pushing past that fear?

Write that down too.

Then take the risk, Brave One, and prepare for the  remarkable that’s waiting…