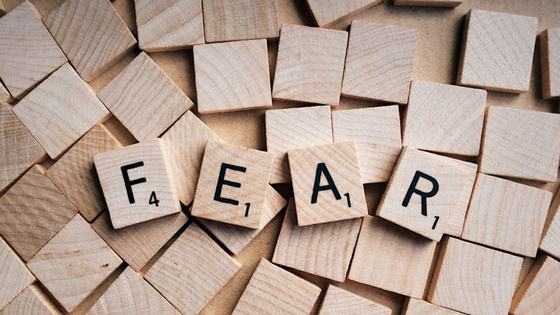 I’m guessing this question isn’t hard for you to answer.

In fact, I’m guessing that, in thinking about it, a whole kennel of miscellaneous fears started barking at you if you entertained the thought for even a minute.

ALL of us are afraid of something, since there are so many opportunities to cower and shake and obsess and descend into darkness these days—on a global, regional and personal scale.

But consider this: maybe whatever is currently scaring you can point the way to a life of adventure.

So glad you asked…because that question, as always, reminds me of a story:

One year our church was sponsoring a women’s retreat titled Trusting God in the Ups and Downs of Life.  I was in charge of finding a drama and designing a set to enhance the theme.

I ultimately decided on a great sketch titled No More Womb, where the two main characters are unborn twins, hanging out in utero, discussing all that they look forward to and all that frightens them about entering the outside world.

Corralling actors was easy; designing the set, however, was a challenge since, let’s be honest, the requirements for this one were fairly weird.

So I asked a graphic artist if he could design us a backdrop that looked like a giant womb big enough to hold two adults dressed like fetuses.

He turned really red, but said he would see what he could do. In two weeks, his wife came to me at church and said, “Terry wanted you to know he’s on his way with the uterus. It was too big for the car, so he had to go get his truck.”

I told her he could just put it in the choir loft of the sanctuary. (I know. What was I thinking?)  Later when I went to get a look at it, I noticed there was a crowd following me. Word had spread, and everybody wanted a peek. Well, we got more than a peek; it was an eyeful. With the ovaries and fallopian tubes included, it turned out to be eight feet tall and twelve feet wide! At least ten sets of fully grown adult twins could have fit in it.

It was perfect for the drama, even though our pastor made us move it until it was time for the retreat. Walking through the sanctuary, he got a load of the thing and said,

“What’s with the longhorn steer?”

When we told him what it was, he turned really red and said, “Good grief! Get that thing out of here before (uber-conservative church member with zero sense of humor) sees it!”

So we hauled it up to the worship minister’s office and put it where he could admire it from his desk.

When he saw it, he turned really red and said, “I can’t concentrate with that thing looking at me all day!”

So we moved it back to the choir loft and threw a few sheets over it. But even the gigantic shroud couldn’t hide the fact that there was something slightly creepy afoot.

The night of the performance, I stood in the back and admired the fruits of our creative collaboration. And as the babies voiced their concerns about life after birth (failing academically, being abducted, being abused), I thought about the therapeutic value in huddling together and talking about what frightens us.

Not always easy, but so worthwhile.

Because the time eventually comes–for all of us–to move forward, to be born, to get out there and do what we were created to do, even (and especially) in the middle of a wild and crazy world.

So how might the naming of fears propel a person into adventure?

People’s fears of dancing have led them to take zumba lessons.

So this week, try naming your fears.

And then take some time to think about how at least one could launch an adventure–even a small one.

Then, please share with us in the comments below.

It’ll be like a virtual prenatal huddle. Minus the mega-womb.