Could you crash someone else’s adventure? 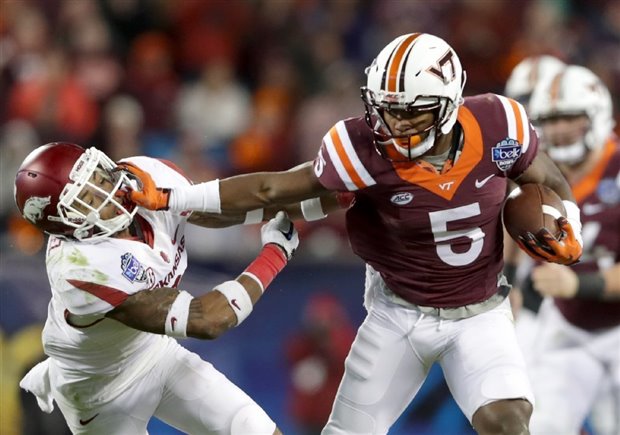 It’s football season, and that reminds me of something I’m not really crazy about: football.

Chances are, you fall into one of two camps: 1) people who are mystified by the mass appeal of this sport or 2) people like my husband, Ben (a huge fan of college football, Virginia Tech in particular) who cannot wait for the season to start. Every game is an adventure to them, a trek into the Land of Unknown Finishes, the thrill of victory, the agony of defeat, and all that.

For years Iâ€™d been meaning to learn more about the game. Then one Christmas Ben gave me a reservation in Coach Frank Beamerâ€™s Football Clinic for Ladies. Yes, believe it or not, 700 women actually paid for a day at Virginia Tech to learn about playing with pigskin.

I know. There are lots of ladies who adore football, so it does sound a little sexist but, as attendance proved, there are plenty who are bewildered by it too.Â

The following spring, when we arrived on campus, I was really looking forward to a sort of â€œFootball for Dummiesâ€ day. The first couple of sessions, however, were obviously for women who knew the game, since they were demonstrating the finer points of particular plays.

Being ignorant of the basics, though, I was drowning in a sea of sport-specific terminology. When these big, beefy men started tossing around phrases like, â€œpush the pocket,â€ â€œstick and rip,â€ â€œoutside hand knockdown skate rush,â€ and â€œhorizontal stretch on the defensive coverage,â€ I wanted to raise my hand and ask where the remedial students were supposed to be.

What I was hoping to learn, in addition to the basics of the game, was sort of a behind-the-scenes, â€œunpluggedâ€ version of footballâ€”an insiderâ€™s look at the life of a football player. What do they eat? How do they cope with the pressure? What goes on in the locker room after a big loss? A big win? In the middle of the game? What all are they wearing under those jerseys? What kinds of mind games do they play with themselves and other players?

And I especially wanted to know more about intimidation.

For instance, when these guys are head to head, waiting for the snap, what are they really saying to the guys on the other team about their mothers?

Alas, my questions were never answered; however, it was a fun day anyway, learning more about my husbandâ€™s favorite avocation.

As we were getting ready to head home from football camp, I stopped one last time to appreciate the magnificent perspective we had, looking up into those expansive stands from down on the turf. And then I was seized by an irresistible urge.

â€œBen,â€ I said. â€œCan you wait just a minute? I really want to run to the other end of the field.â€

Iâ€™m sure he felt like rolling his eyes, but he indulged me by saying, â€œSure. Go for it.â€

And I tore off (well, maybe trotted off; I’m not exactly “tore off” material), running the entire length of the football field and back, with my hands in the air, acknowledging the imaginary roaring crowd. It was fabulous. I really did feel likeâ€”and Ben says I actually looked likeâ€”an official Rear End.

Do you know someone whose brand of adventure is not exactly yours? For the sake of adventure itself, would you be willing to take a whack at it?

You may end up loving it. But even if you don’t, I can guarantee that your friendship and even your life will be at least a little bit richer when you go poking around in someone else’s bliss.