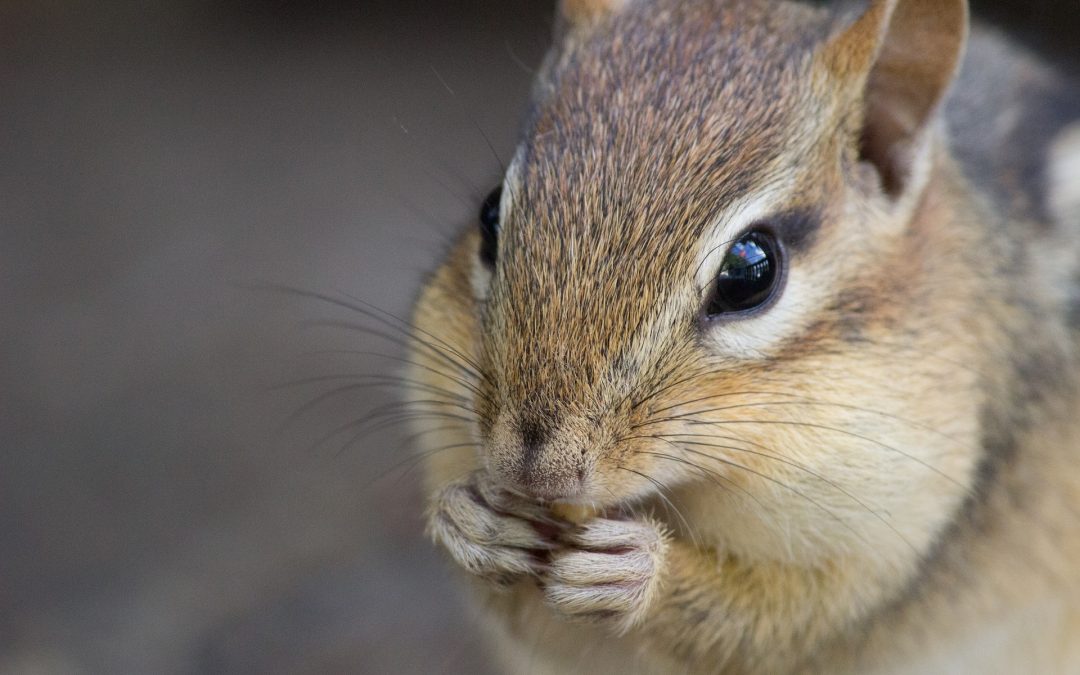 Houston, we had a problem.

When I saw The Cat staring at the refrigerator, I thought we had a mouse in our midst. But when the little thing darted out and zoomed into the living room, I could see it was not a mouse, but a chipmunk.

Typically we have a loose division of labor at our house. I take care of poop and puke. My husband takes care of insects and small, rogue mammals.

But that night I was alone. (The Cat = the most non-predatory feline ever)

Now before you read further, I can imagine that you’re already thinking of your own “uninvited animal in the house” story. I’m sure you handled it with grace and aplomb, intelligence and finesse.

In the absence of the chief mammal catcher, I figured there was nothing to do but get the broom, sit down in the living room, and wait for another appearance. How hard could it be, I thought, to corral and nail such a wee beast?

And sure enough, in just a couple minutes, there he came, strolling out from under the couch like he owned the place.

I immediately jumped up, yelled something like, “Towanda! and chased him all over the downstairs. Finally I cornered him on the windowsill. I raised the broom to knock him senseless and, I swear, he was literally frozen in fear before me, looking at me with pleading black-button eyes, his tiny, terrified body atremble. We stared at each other for a good thirty seconds as my killer instinct turned to mush.

And I just couldn’t do him in.

Totally (and literally) disarmed, I lowered the broom.

“Oh for crying out loud,” I told him. “Go back where you came from!”

Laying down my weapon, I trudged upstairs to bed, hoping he’d grow some sense overnight and hightail it for the Great Outdoors.

The next morning, my head on a slow swivel, I crept down to the kitchen, but saw no signs of chipmunk anywhere. But when I went to get some milk, I saw him–back against the wall between the counter and the refrigerator, curled up into a ball with his tail wrapped around himself, his little abdomen rising and falling to the rhythm of his dreams.

Yes, he was asleep.

And yes, I could have hammered him then. It would have been so easy. But I just couldn’t make myself do him in, maybe for a couple reasons:

I have friends who will hear this story and laugh at me. These are people who used to shoot birds and squirrels and other moving targets when they were kids, laughing maniacally behind their BB guns. And some of these people are now hunters. They can stare down Bambi’s mother, then shoot, eat, stuff and display, and love every minute of it.

I can beat up ugly animals (snakes, spiders, fish maybe), just not cute ones.

And this little guy–well, he had me at hello.

2. Just as important: I could feel a small adventure rising up in this little dilemma…

and I was up for the challenge: How could I get this adorable thing out of my house alive and unharmed?

Of course, I followed my instincts to the ultimate Source of much wisdom–YouTube–

and typed in “how to catch a chipmunk in the house.”

I knew, of course, the risk of trying to get him out of there alive: I might never catch him. He might grow old with us, attract a girlfriend from our woods with his chipmunk pheromones (link) and procreate in a corner of the house over and over and over forever.

But it was the promise of something remarkable that kept me searching.

Two videos caught my eye. One involved catching a squirrel in the woods by luring him into a can of Pringles; the other showed a guy sweeping a squirrel from behind a dresser into a bag.

I decided to combine the best of these ideas, and put some cat food in a plastic grocery bag, set it in front of the space where he was slumbering, go into the next room, and wait for him to come and get it.

No more than sixty seconds later, I heard the rustling of plastic, came into the kitchen, picked up the bag, peered into the bottom, and came face-to-face with those big pleading eyes again.

Out he stumbled, weaving his way to the woods, looking a little drunk, but generally functional.

Oh, the satisfaction of a problem solved and an adventure well-played along the way.

So what’s your problem these days?

It may be a small one: malfunctioning internet or other technological annoyances, a broken down car or a friend who’s perennially late.

Or maybe you’re upping the ante a bit in the problem department: fatigue, the growing sense that there’s more to do every day than you could possibly accomplish, or the desire for a mate who’s hiding out there somewhere while the rest of the world, it seems, is pairing up at the speed of light.

Or maybe it’s a problem over which you have zero control of your own broken heart: a child who has wandered into self-destruction, a life altering loss, an illness that defies treatment.

I know that not every problem can be resolved in 24 hours.

Some problems will never go away.

But on your journey to learning to figure it out, wait on it, deal with it, live with it, sit with it a while, or even make weird friends with it…

Can you also find a way to take a risk–even a small one–in anticipation of something remarkable happening along the way?

Others (like these people) have embraced adventure while dealing with impossible odds.

If you’ve ever turned a problem into an adventure, please share below. The rest of us need your encouragement to “set the chipmunk free.” So to speak.