Can you make friends with annoying? 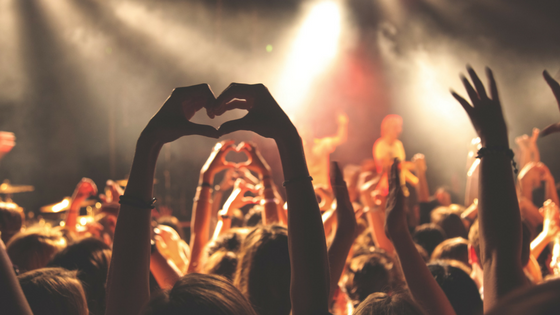 Some people are more easily annoyed than others. Maybe you are one of those. If so, just know it’s you and your kind I’m talking to here.

Because there’s a very good chance that you can turn an annoyance into an adventure…if you don’t mess up like I did.

At a Zac Brown Band concert not long ago, three young people were seated in front of us: a very pretty girl and two guys. One was obviously her boyfriend; the other poor sap she flirted with occasionally so he wouldn’t feel like the fifth wheel that he was. At least that’s what it looked like.

To be clear, I am all about enthusiasm at concerts–dancing, singing along, hands in the air and all that.

But these people were right in my line of view, making it impossible to see the stage, and they were getting on my nerves because they (the jumping girl in particular) were not acting like they cared about the music at all–that fabulous music by my favorite band of all time. I seriously considered texting JLL followed by my “issue,” but didn’t think anyone would respond to “obstructed view due to jumping, not even in time with music.”

But I wanted them to go away, or at least change seats. I wanted to tell them–her especially–to go to the grassy section and do their acting out.

The grass was closer to the bathrooms anyway, so they could make their many trips in far less time. And I would have an unobstructed view of the Zac Brown Band. (Did I mention they were my favorite band of all time?)

Because, of course, the concert was all about me.

Anyway, when they started in with the selfies, at first I just rolled my eyes. But then, for reasons known only to God, my heart started to soften a little, and I asked myself, “Can you just make friends with it? This situation? These people?”

And suddenly, what I WANTED to do was photobomb one of their little selfies. I seriously considered sticking my head in between Jumping Girl and Fifth Wheel, and making a dumb face.

Because it was a risk: that I would look even goofier than they were acting. That they would be hostile or think I was crazy or–worst of all–old. (Too late.)

It makes me think about the risk of making friends in annoying, inconvenient circumstances. Maybe with a person who crosses your path. Or maybe even with the circumstances themselves. Or maybe with both.

I got it right once.

During our unfortunate stay at a shelter during a flood , we were completely irritated at having ourselves inconvenienced. After a while though, when it was clear that the circumstance wasn’t going to change, we made friends with others–people on the cots to our left and right, everyone frustrated because nobody wanted to be there. We all had places to be, things to do.

One lady we’d befriended the day before told us that she was trying to get to her mother, who was in hospice care. We did our best to comfort her, and all of us on cots in her corner of the gym formed a little support group–even more valuable when, the next day, we saw her with her head in her hands, crying.

And all our hearts synced up and broke together.

We huddled until we were released to go in the night, one person (strangers, remember) riding with her in her car through dark, unfamiliar territory, all of us staying in touch by phone until we were at our destinations the next day.

I still carry her name and number in my wallet.

And I should have let that experience guide my behavior, if even on a more superficial level, when I found myself in an inconvenient (and annoying) place with those nearby humans the night of that concert.

Because I am now sorry I didn’t follow my instincts, and photobomb the Three Mouseketeers in front of me. But you can bet that the next time opportunity knocks, I will open that door, since I now know that some kind of adventure might be waiting on the other side.

And just to be sure, I have been practicing my photobomb techniques. These people are actually friends, and this was a happy (not irritating!) occasion, but whatever. I’m locked, loaded, and lying in wait for a choice annoying inconvenience.