Where is your joy hiding? 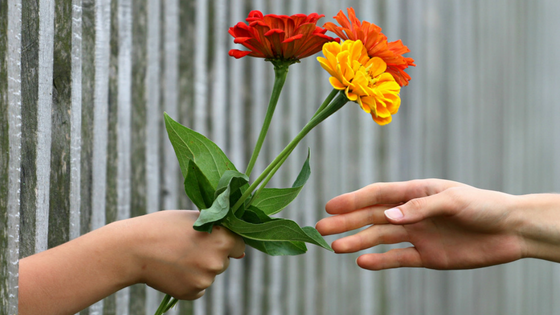 Probably right under your nose.

You might, however, want to avoid beating the bushes for it in a place that’s obviously designed to make you happy.

I have heard more than one parent raise a voice at the kids at Disney World, saying something like, “We’re in the happiest @#$##@! place on earth! Stop crying and have some fun or I’ll (all together now!) give you something to cry about!”

A couple weeks ago, our family thought it would be a blast to go to an amusement park one warm summer day.

Okay, it was a hot summer day. Blistering, suffocating hotness that rose like volcanic gas from the asphalt. In one of those happiest places on earth, where lines for rollercoasters were an hour long and people were actually passing out from the heat.

Exactly what were we thinking?

During the day we witnessed a number of parents losing patience with crying children.  One mom and dad–who otherwise appeared to be very nice people, by the way–told their son that he had “ruined” their day by being so unhappy. At one point, the dad said, “That’s it! You’re grounded!”

The kid was four.

How the heck do you “ground” a four-year-old? Seems to me his whole life was already “grounded” by virtue of his preschool status.

“It’s funny,” my daughter said.  “Kids seem to have more fun doing stuff that’s not supposed to be that much fun.”

“Like sitting on the front steps, eating popcorn and watching it rain.”

Or like the photo of her son she had posted on FaceBook a week earlier with this profound commentary: 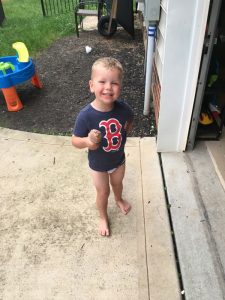 “Ben is living his best life.  Live it up, kid. The day is coming when the world will judge you for eating ice cream in your underwear in front of the neighbors.”

And what might sound a little fatalistic to some is just, to me, a reminder to find and celebrate the joy in front of you.

Because joy has a way of sneaking up on you like that.

In her amazing TED talk, Where Joy Hides and How to Find It, Ingrid Fetell Lee says that the physical world can be a resource for us in creating happier, healthier lives.

For instance, she talks about the artist Arakawa and poet Madeline Gins who
created an apartment building that they believed would reverse aging–a real place outside 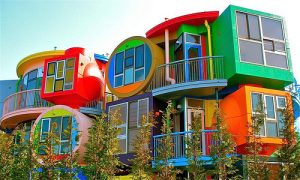 Tokyo, with bright colors and shapes, and floors that undulate so you don’t walk around as much as you bounce around.

“They set out to create an apartment building that would make us feel youthful,” she says, after her visit there, “but ended up creating one that made us feel joyful.”

So what’s her advice for bringing this lesson to life?

“Maybe instead of chasing after happiness, what we should be doing is embracing joy and finding ways to put ourselves in the path of it more often.” 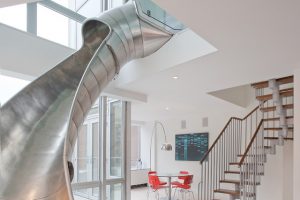 And this:  Not long ago, we visited Glen Canyon in Arizona with friends. All day we explored canyon after canyon in the fingers off of Lake Powell in a little speedboat. To be clear, this was an all-day trip in a canyon, so the “beaches” in the area were just small patches of uncivilized sand. Did I mention it was all day? So you cannot imagine our elation, around 2:00 pm,  as we motored up on this most impressive structure:  the floating toilet.

And this wasn’t just some Porta Potty, undulating precariously in the wake of a bunch of outboard motors. No, it was more like the Taj Mahal of latrines. We were so very excited to dock the boat (yes, there was a dock!), and climb on over to this new adventure–a little bit rock and roll-y, but inasmuch as going to the bathroom can be fun, it really was.

So what if you went on your own #joyspotting adventure, almost like a scavenger hunt, looking for it in your physical environment?

You might be surprised to find that  there’s delight to be had, no matter what kind of craziness you’re experiencing, and it’s probably right in front of you.

Even during tough times.

And what if you curated your joyspottings–onto an Instagram page, a photo album in your phone,  a journal….even if they’re very small, a tad bit dumb, kind of childish or even weird to the rest of the world?

You just might be surprised to find yourself one day sitting  on your front steps with a bowl of popcorn, watching it rain…

or eating ice cream in the driveway in your underwear.

And I can pretty much guarantee that if you pay attention to your life, you’ll actually start hearing the Creator of all good things say,

“This joy’s for you–right here, right now, in this moment–no matter what.