What if it all goes wrong? 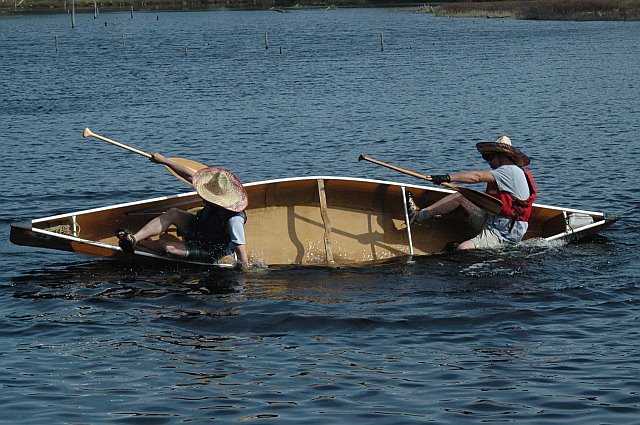 Years ago in Santa Fe, I saw a picture of a worn out, broke down, tore up cowboy who had obviously been kicked off his horse.  Underneath him was this sign:

There’s comfort in them there words.

Sometimes the satisfaction of giving it a whirl is worth getting a little heave- ho when things go wrong. Not tragically wrong, just scary-no-fun wrong. Or humiliating-wrong. Or boy-am-I-bad-at-this wrong.

My husband, Ben, and I are no strangers to getting throwed. It went down (literally) like this:

We were were canoeing down the Shenandoah one beautiful day. The water level was good and the temps were climbing to 80 when we had an unfortunate encounter with some rapids, rocks and a fallen tree–a nasty collection of conditions in a swift current.

Let me just pause right here, and admit that my husband and I are not the best canoeists, and even worse collaborators when we are both deficient in skills at just about anything.

It’s a test of our marriage that typically goes like this:

Me: “HEY! ROCKS AHEAD!” (points paddle to two o’clock)

Him: “AHHH!! YOU HAVE GOT TO TELL ME YOU SEE ROCKS BEFORE WE’RE
SIX INCHES AWAY FROM THEM!”

Him:  (canoe turns like the Titanic) “I’M DOING THE BEST I CAN!”

Me: (canoe crashes and capsizes) “WE HAVE GOT TO TAKE A CLASS
BEFORE WE DO THIS AGAIN!”

We always argue in a canoe. Sometimes I think we could sit in the thing in the yard, and end up in an argument.

So on the Shenandoah that day, our canoe turned backward, and got stuck on the rocks, the current going crazy under us. Then we saw that somehow we had also become tangled up in the branches of a fallen tree. A big limb ended up between us–behind me and in front of him. All we could do was look at each other and YELL (because, obviously, this sport involves a LOT of YELLING. At least for us.), “HOW ARE WE GOING TO GET OUT OF THIS?” And when my husband admits he’s stymied, I know we are literally up the creek without a paddle.

Thinking in a crisis is not my strong suit, but I did have a notion. I thought, “If I reach back behind me, I can get hold of the limb and pull sideways. Then maybe we can at least move away from the branch between us, possibly reducing the chances that one of us will exit this crisis headless.”

Brilliant idea, if I do say so myself. I reached around and pulled sideways, and voila! We eased that ol’ limb right over, and it was no longer between us.

Too bad the canoe then went sideways, and dumped us into the rapids.

Ben stood up, but I submerged, trapped under a limb, the current forcing my head underwater…and I couldn’t get to my feet. I had a death grip on a limb, and used it to pull myself up for air.  Ben grabbed my hand and said, “STAND UP!” But I couldn’t. The current was too swift. I slid back under the rushing water. He was frantic, I was frantic. I came up, gulping for air a second time, then went under again. Up and under a third time. Then a fourth.

All I could think was, “This is what it’s like to drown.”

I was powerless, and my life jacket was useless in the churning water beneath that limb. Our friends were far downstream.

Finally, I decided to just let go of the branch I had a death grip on (you know, when you’re trying to save yourself, you’ll grab whatever’s handy), and when I did let go, I could finally struggle to stand. Ben led me to a nearby rock, shouted, “SIT! STAY!!” like I was his dog, and somehow managed to save the canoe, dump it and right it again with the help of one of our friends who had paddled upstream to help us.

So really–what DO you do if it all goes wrong?

You probably know what this feels like. Maybe you got a little adventurous one time, and totally embarrassed yourself. Or you failed epically.  Or maybe you ended up “off your horse” and on the ground, broke down and tore up.

When this happens, in order to keep my sense of adventure alive, I find it helpful to treat these unfortunate times not as failure, but rather reconnaissance.  Reconnoitering. The gathering of information.

But actually, truthfully, what we learned was this: we needed kayaks.

So we bought two. And there ya go.

But we’re glad we gave canoeing a few (years of) shots, anyway.

Because the satisfaction of “just trying” isn’t altogether mythical.

But at least we’d rode.